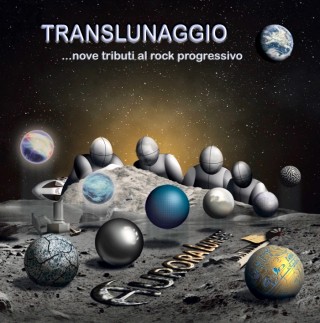 Yes, maybe, a cover compilation, in the context of our beloved musical genre will seem an unorthodox operation, but in this phase of AL’s path we felt like doing it.
It seemed logical and natural to put  together in a single CD covers released at different times on various themed tribute-compilations, published in a period of 6 years (2009 – 2014), two of which  available by digital download only. Two new cover songs were added. Their choice was driven by not only historical reasons of musical affinity with our origins but, above all, by a deep affection, never dimmed, for two great and unparalleled voices like Francesco Di Giacomo and Demetrio Stratos, whose musical expression is still alive within us, with the same emotion as when we  admired them performing  on stage or we had a little chat with them on the backstage.
The songs were ordered according to  the release date of the originals, but recorded and published at different times.
Ultimately, all this work for us is a moment of transition, that expanded over several years. A passage from one condition to another, from one time to another, after having achieved one of the objectives that we set ourselves in life; a known satellite from which projecting ourselves towards other unfathomable dimensions, for better or for worse, in reason or in the wrong, always driven by that inexhaustible source of energy that is Music. This is our “Tanslunaggio”.

The album is available through the official distribution channels of  Lizard-Records.

Fate has allowed  the Aurora Lunare CD  to  see the Christmas lights of 2013. Our  long journey culminating in the  realization of this work has been  a  series of coincidences-recurrences,  with the  constant support of those who shared this project with us and whom we will never cease to thank.

The album is available through the official distribution channels of Lizard-Records.